Home » Tourette Syndrome and the COVID-19 Vaccine: Ask the Expert

Tourette Syndrome and the COVID-19 Vaccine: Ask the Expert

The Coronavirus pandemic has led to one of the most challenging years many of us have ever experienced. As the world begins to safely reopen, there are a number of questions regarding the COVID-19 vaccines. Join Dr. Michael Okun, Chair of Neurology and Executive Director of the Norman Fixel Institute for Neurological Diseases at the University of Florida Health College of Medicine, on Wednesday, June 23 at 3 pm EST for a Facebook Live discussing the vaccines, exploring the impact on the Tourette Syndrome and Tic Disorder community, addressing myths surrounding the vaccines, and examining the future of the new normal.

Got a question for Dr. Okun? Ask it in advance! 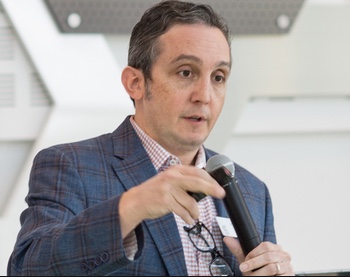 Dr. Okun was instrumental in the construction of a one-stop patient-centered clinical-research experience for national and international patients seeking care at the University of Florida.  This change in care and research delivery has since been named the service and science hub model of care. The UF based center draws national and international visitors interested in deploying this innovative clinical-research model. Dr. Okun has served as the National Medical Director for the Parkinson’s Foundation since 2006 and as the Medical Advisor for Tyler’s Hope for a Dystonia Cure.

He has been supported by grants from the National Institutes of Health, the Smallwood Foundation, the Tourette Association of America, the Parkinson Alliance, the Bachmann-Strauss Foundation, the Parkinson’s Foundation, and the Michael J. Fox Foundation. Dr. Okun has an active research career exploring non-motor basal ganglia brain features and currently holds two NIH R01 grants and several foundation grants exploring various aspects of deep brain stimulation and neuromodulation.

Dr. Okun has been an integral part of some of the pioneering studies exploring the cognitive, behavioral, and mood effects of brain stimulation and since 2005 his laboratory has been working to uncover the electrical brain signals associated with human tic. He has also partnered with Dr. Ayse Gunduz and Kelly Foote to develop a first generation of closed loop adaptive deep brain stimulation approaches.

Dr. Okun was the founding PI for the International Database and Public Registry for Tourette Deep Brain Stimulation. He and his group have contributed data to support the FDA approval of several device related approaches now used to treat human disease.

Dr. Okun holds the Adelaide Lackner Professorship in Neurology and has published over 400 peer-reviewed articles.  He is a poet (Lessons From the Bedside, 1995) and his book, Parkinson’s Treatment: 10 Secrets to a Happier Life, was translated into over 20 languages. His most recent book Ending Parkinson’s: A Prescription for Action was co-authored with Drs Ray Dorsey, Bastian Bloem and Todd Sherrer. Dr. Okun was recognized in a 2015 White House ceremony by the Obama administration as a Champion of Change for Parkinson’s Disease.

Dr. Okun is also the previous Chair of the TAA’s MAB and was also the PI of the Tourette Deep Brain Stimulation International Registry and Database sponsored by the TAA.