918-694-0080
touretteok@gmail.com
DONATE TO YOUR LOCAL CHAPTER
Make a Donation

The Tourette Association of America Oklahoma Chapter is a volunteer led, nonprofit organization supporting the needs of individuals and families affected by Tourette Syndrome and Tic Disorders. We are committed to raising public awareness and fostering social acceptance; advancing scientific understanding, treatment options and care; educating professionals to better serve the needs of children, adults and families challenged by Tourette and Tic Disorders; advocating for public policies and services that promote positive school, work and social environments; Providing help, hope and a supportive community across the nation; and empowering our community to deal with the complexities of this spectrum of disorders.

The Oklahoma Chapter provides support to Oklahoma families and individuals affected by Tourette. It does that in several ways: sponsoring support groups centered in Tulsa, Oklahoma City, and Stillwater; conducting teacher and school in-service training; providing information on educational IEPs and 504s; and answering questions regarding student behavior and associated conditions. The Oklahoma Chapter actively seeks to involve young adults in the Tourette Association of America’s Youth Ambassador and Rising Leader programs and also sponsors a post-secondary scholarship program for high school graduates. 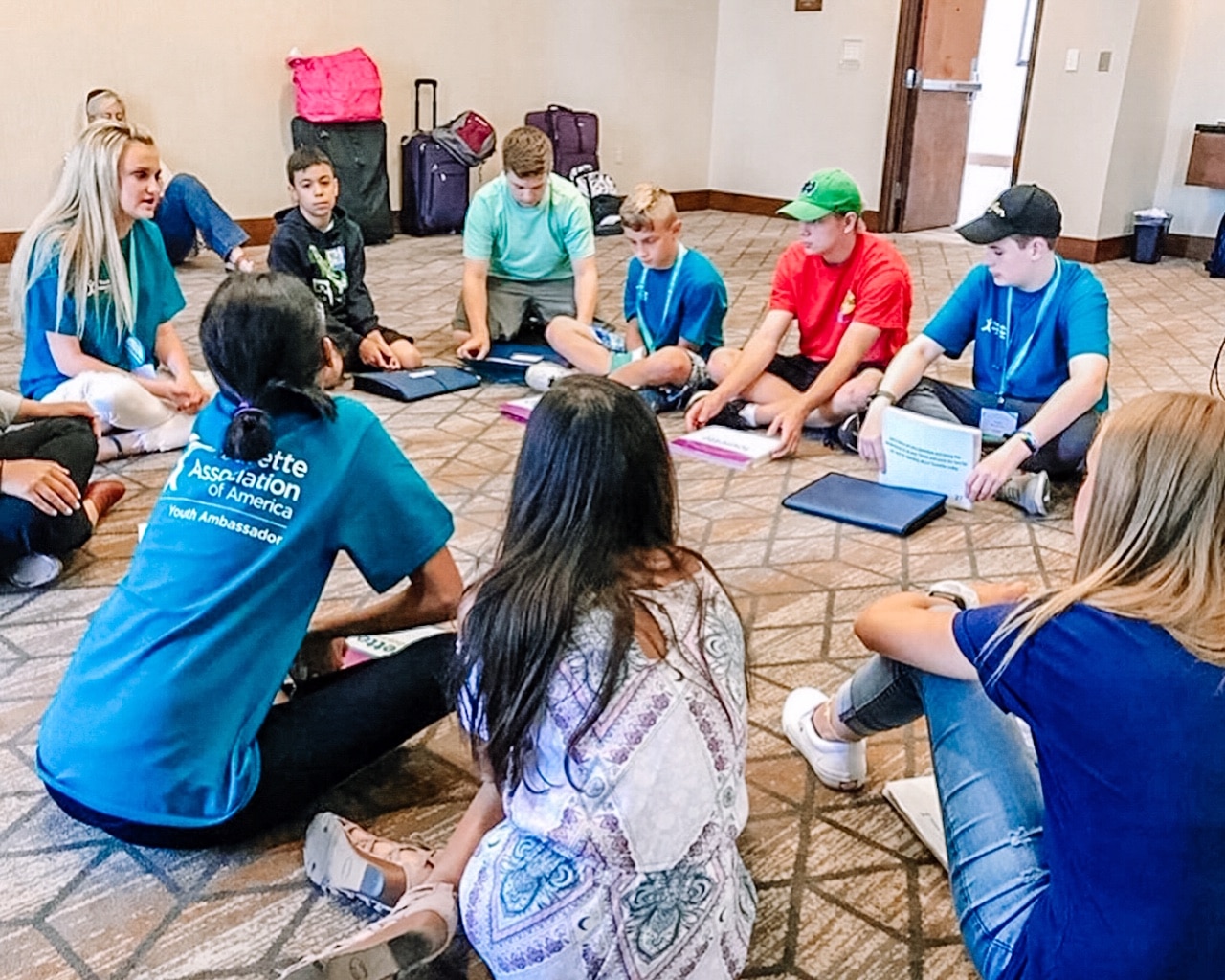 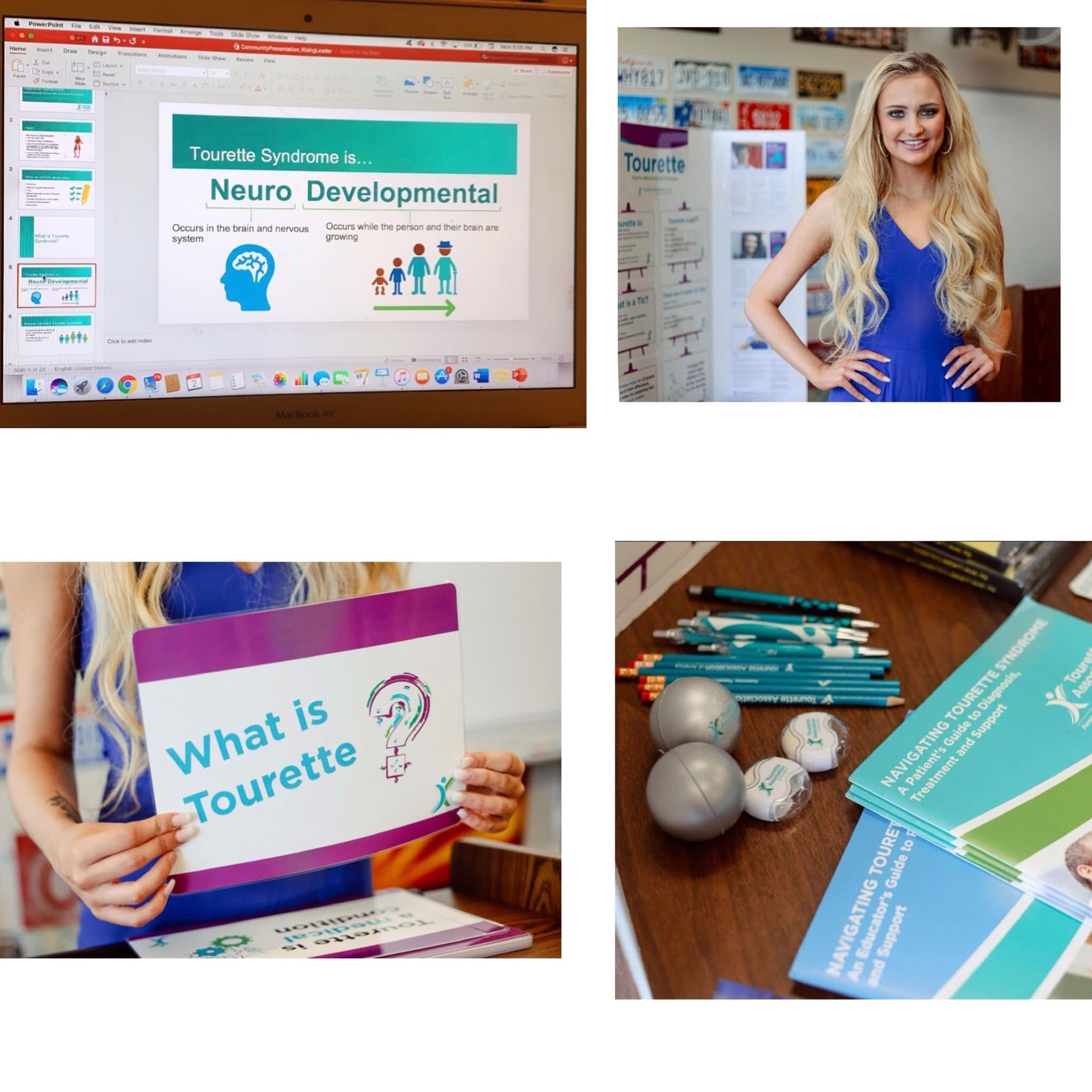 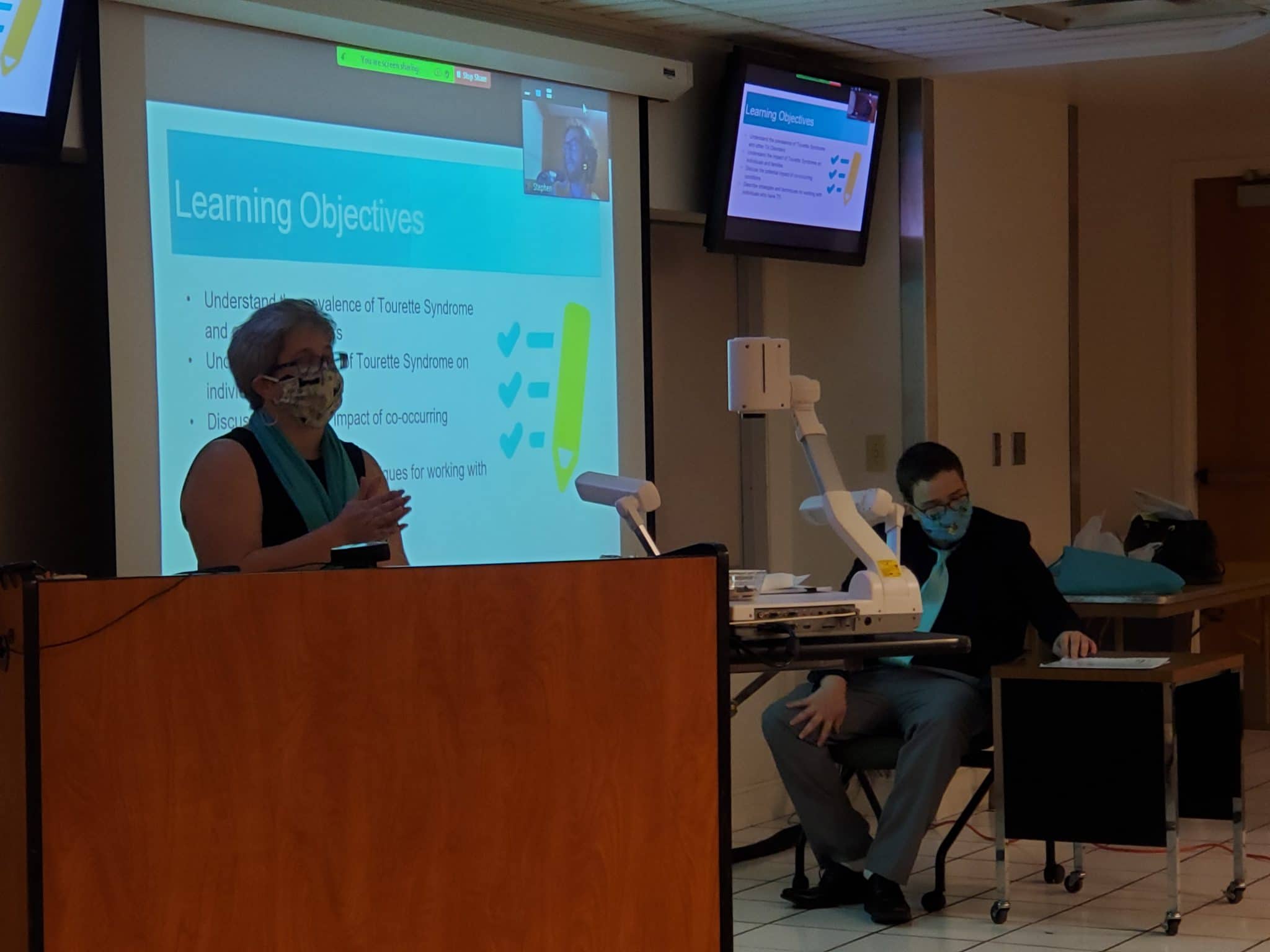 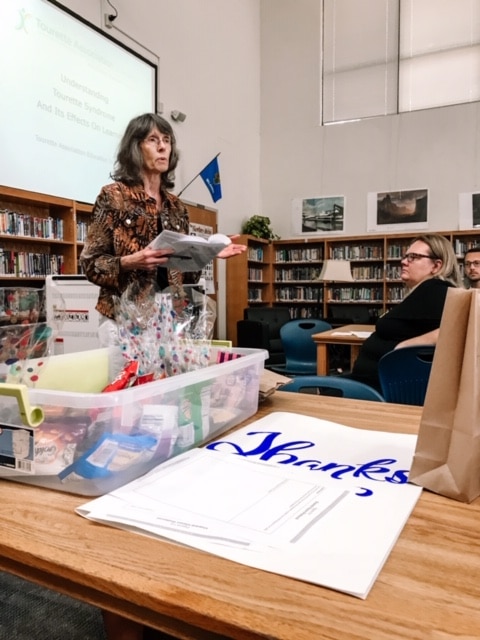 Monthly Support Group meetings are expected to resume in August, preferably in person but with a Zoom option.

Support Group
Oklahoma Chapter support groups are intended to provide information and support to parents of children with Tourette, as well as children and adults with Tourette. Topics may include tics, behavior, peer relationships, co-occurring conditions, school and education, doctors and medication, family relationships, etc. Support groups meet as needed. Prior to the pandemic, meetings were in person but may be via Zoom to accommodate pandemic safety guidelines and to accommodate persons living far from support group sites. Support group locations and coordinators are:

Contact any of the above coordinators to learn more and request a support group meeting.

The TAA Youth Ambassador Program brings together, trains and supports teens to advocate for and talk about Tourette and Tic Disorders in their community, with their elected officials and before their peers at school, sports leagues, scout troops, camps and after-school programs. Learn More

Youth Ambassadors are 12-17 years of age and go through a training program along with their parent or guardian, thus comprising a Youth Ambassador team. Oklahoma currently has two Youth Ambassadors, each of whom has had unique opportunities and experiences as a result of the program. Each can attest to how important the program has been for them.

· Bryant – The Youth Ambassador program has been very influential to me and I am very grateful. I have learned so much more about TS and I have met so many others that share this condition when I had never met anyone like me.

· Kaden – I like the Youth Ambassador program because I get to help people. I get to talk to classes about Tourette to help other students not get bullied. I also get to work with my mom to train future teachers to know what it’s like to have Tourette from the student’s point of view.

The Rising Leaders program is a way for aged-out Youth Ambassadors and young adults to continue growing their leadership skills and advocating for persons with Tourette. Oklahoma has one former Youth Ambassador currently serving as a Rising Leader. In that capacity, Olivia has traveled across the country giving anti-bullying and inclusion presentations on Tourette to students, teachers, and school administrators. She also founded a non-profit organization that teaches children with Tourette how to advocate for themselves in the classroom.

The TAA conducts in-service presentations around the state with various schools on an as needed basis. It can make a tremendous difference in your child’s academic experience to have the school staff educated about the many facets of TS. Learn More

Two Oklahoma Chapter Board members are trained Education Specialists by the TAA (Karen Woodrich, Miriam Ward). Each is available to assist with in-school training for teachers and students. Each also can accompany parents during IEP meetings with teachers.

The Oklahoma Chapter of the Tourette Association of America received an unexpected bequeath from a deceased individual’s estate. Current Chapter members have no knowledge of the history of this person’s connection to Tourette Syndrome or someone with Tourette. The Board of Directors thoughtfully considered how to use the generous gift. The Board believes our Chapter’s scholarship program is a living legacy to this individual’s generosity. Necessary information for potential applicants can be found by clicking on the links below.

Both for parents and for the individual diagnosed with Tourette, the symptoms and diagnosis can be a bit unnerving, because there is so much uncertainty. The Tourette Association of America (TAA) has excellent resources and you can learn much from the documentary at You Tube, “I Have Tourette’s, But Tourette’s Doesn’t Have Me.” However, the Oklahoma Chapter wanted a video featuring Oklahoma parents and persons with Tourette (children and adults), so the Chapter produced, “In Your Own Words.”

Karen Woodrich, Chair, kwoodrich50@icloud.com, 918-694-0080
Karen is both a wife and mother to individuals with Tourette. Besides being Chair of the Oklahoma Chapter, she is active in the Tourette Association of America. Karen works part-time as a Disability Rights Activist and has lobbied on Capitol Hill for more inclusive policies for people with TS. Karen worked full-time as a Structural Prototype Designer for over 30 years. Her daughter, Olivia, was a Youth Ambassador and is now a Rising Leader.

Clem Ward, Secretary & Treasurer,
Clem is a father to a son with Tourette. He has served the Oklahoma Chapter as its Treasurer since 2001. Clem is an economist, now retired from Oklahoma State University.

Ashley Butler, Board Member
Ashley is a mother to a daughter with Tourette. She has been a board member of the Oklahoma Chapter for several years.

Darla Chitsey, Board Member, dchitsey@yahoo.com, 405-343-9211
Darla is a mother of a son with Tourette, who is also a Youth Ambassador and recipient of an Oklahoma Chapter post-secondary scholarship.

Ed Collins, Board Member
Ed is on the faculty in Special Education at the University of Central Oklahoma. He has specialized in school related aspects of Tourette and associated disorders for nearly four decades, especially information for parents on IEPs and 504s. He has been recognized for his contribution to the Tourette Association of America and has been involved with the Oklahoma Chapter since its inception.
Michael Lewis, Board Member, michael.lewis.xn@gmail.com, 918-946-0188
Mike has Tourette and is a science teacher at Union Public School in Tulsa. He has been active in S.T.E.M. workshops with NASA and the U.S. Naval Academy as well as in Oklahoma. Mike is an author, actor and director, and has judged Miss Teen Oklahoma.

Justin Ward, Board Member
Justin is an adult with Tourette. He graduated from Saint Gregory University and works for a local physician.

Mimi Ward, Board Member, cmbjward@sbcglobal.net, 405-377-3884
Mimi is a mother of a son with Tourette and a former special education teacher. She is now retired from Oklahoma State University. Mimi has been active in the Tourette Association of American and the Oklahoma Chapter for over 30 years. She is a former Chapter Chair and has conducted numerous teacher in-service trainings in Oklahoma.

Olivia Woodrich, Board Member
Olivia is an adult with Tourette, a former Youth Ambassador and Rising Leader in the Tourette Association of America. For her social activist work related to Tourette, she received the prestigious Diana Award and also the President’s Volunteer Service Award. She has been interviewed by several media outlets (PBS, Fox News, Cox Radio, Buzzfeed, and People’s Magazine). Olivia participates in the Miss America pageant system where she holds two titles. Currently she is a junior at Oral Roberts University.