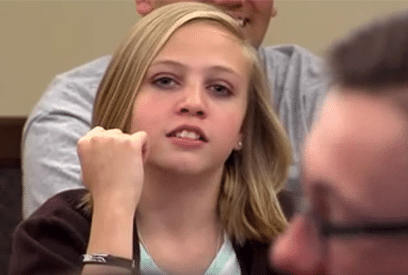 "They understand who I am and they don't let the Tourette's be who I am."

ROY — Have you ever had to sneeze or cough while trying to keep it in? It’s tough, but that’s how it feels when a child with Tourette syndrome tries to stifle an impulse to shout or sometimes even yelling obscenities. Now, one Utah junior high is making sure a student’s tic disorder doesn’t hold her back.

Loud barking and cursing during a history lecture normally gets a student kicked out of class. But Sand Ridge Junior High student Brooklyn Eastman’s behavior is considered “normal” for her. Three years ago, Brooklyn was diagnosed with Tourette syndrome.

When the eighth-grader yells profanities in class, she says classmates and teachers know “Oh, it’s just Brooklyn, she’s not crazy.”

The diagnosis might have been a frightening and frustrating one for most kids, but Brooklyn says, “I think I was more relieved to know that there isn’t something majorly wrong with me.”

Advertise with usReport this ad
Lance Eastman, Brooklyn’s father agrees saying, “All of a sudden we started getting an understanding of what was happening rather than the confusion with not knowing.”

But the Eastmans still didn’t know a lot about Tourette’s. What had started with a persistent cough quickly accelerated to motor and verbal tics and more recently, compulsive swearing.

“Brooklyn really had a pretty abrupt onset of tics,” said Dr. Michael Himle, the director of the University of Utah’s Tourette Center for Excellence.

A big concern for the family was making sure Brooklyn’s teachers, classmates and administrators knew about Tourette’s. So in 2015, staff and students at Sand Ridge got lessons in how to make Brooklyn feel comfortable at her new school.

“Helping them to understand that Tourette’s is a neurological disorder. It is not bad behavior and that’s really a key component,” says Eva Tukuafu, a clinical social worker at the Tourette Center.

“We just set some things in place to get a little education, not only for myself but for our staff, and once that was in place we just waited for her with open arms,” said Scott Elliott, principal at Sand Ridge.

Himle and Tukuafu work for the Tourette Center for Excellence, and the center sent Tukuafu to Sand Ridge to help the teachers there better understand how to handle Brooklyn’s vocal outbursts.

“Sometimes it’s just that we need the teachers to ignore it. We need them to ‘not’ draw attention to it,” Tukuafu said.

Students and teachers got the message. Brooklyn’s words, no matter how inappropriate, do not appear to disrupt the class. And, Brooklyn’s willingness to own her condition has had the biggest impact.

“So, I just wanted to get up and say ‘Hey guys, I’m Brooklyn, I have Tourette’s. It’s no big deal, just kind of ignore it,'” she said.

“And so we just choose to live our life. Brooklyn has always been a very positive, outgoing little person,” Beckie Eastman, Brooklyn’s mother.

Students at Sand Ridge are allowing Brooklyn to live her life. They ignore the yelling and cursing but not the girl with the big smile and outgoing attitude. Last spring, Brooklyn was elected eight-grade class president.

“Brooklyn is a leader for kids and you can tell that when you talk to her and others,” Elliott said.

“Brooklyn is just an absolutely amazing young woman,” she said. “She’s a phenomenal advocate for Tourette’s.”

Brooklyn believes her success at the school has come because, “They understand who I am and they don’t let the Tourette’s be who I am.”

The U’s Tourette Center for Excellence is one of only 10 in the country. One of the center’s goals is to train faculty and staff at schools throughout Utah on how to positively impact students with tic disorders like Brooklyn’s.