I walk with Team Tourette because my son has given me a whole new meaning to life.

Around the age of two, we noticed behavioral issues. Soon after, he started to clear his throat often. Initially, we thought it was allergies and took him to an ENT. They had no idea what or how he was making the sound and said they needed to scope him. We couldn’t bring ourselves to just start running tests without clear reasons so we chose a different route.

We took Aiden to an allergy specialist where he started allergy shots as well as to a behavioral therapist for the behavioral issues. That’s when we discovered that he was having tics. And after we thought about it, we realized his biological father, my former stepbrother, also had a sniffing tic.

Aiden suffered through chronic constipation and eventually had to be hospitalized. During this time, his physician made a lot of referrals. He was referred to a neurologist, psychiatrist, psychologist and gastroenterologist.

That’s when we finally got the diagnosis that made sense. We have a son with Tourette. With our treatment team, we have made a lot of progress. Aiden needs to take a lot of medicine and struggles with that at times. He has been on allergy shots for a few years now, and is impacted by Asthma, Allergies, Tourette, Anxiety Disorder, ADHD, Severe Chronic Constipation and OCD.

Aiden struggles with making friends and all parts of school. We struggled with the school and trying to get the services he needed without making him feel like a bad child or an outcast. His was the first 504 plan his counselor had ever done for Tourette and she has been with the school for many, many years.

School staff don’t understand Tourette and I try hard to help them. It is a daily struggle, especially with the behavioral issues we are working on. He was denied many IEP’s but now has one based in his behavioral issues. At this point we will take what we can get to help him.

He is such a trooper. He has been through so much in the seven years he has been with us and he is the smartest, sweetest little boy. We call him our smarticle particle.

His little sister, through his biological parents, is very similar to him. Through the discoveries of Aiden’s diagnosis, we have helped her. She is living with my former stepsister and is having a very loving childhood. Like Aiden, she’s getting the care she needs.

Both her and my son get to see their biological mother and we are friends through Facebook so that we can keep up and show the kids’ pictures. After giving birth to her third child, Aiden’s biological mom has turned her life around and is raising him.

Aiden’s diagnosis has helped bring light to his biological father’s issues. While he has a diagnosis of ADHD, he has Tourette but has been undiagnosed. He has struggled with incarceration throughout the last seven years.

Aiden has a great care team and we have made amazing progress, but it is a road we are continuing down and have a long way to go. We would not be where we are if it wasn’t for the help from everyone at the Tourette Association as well as his care team at Children’s of Alabama and the Children’s Behavioral Health Ireland Center.

Aiden was an answered prayer. My husband and I wanted a son but couldn’t have one so by adopting him, he has completed our family. In the picture below you will see me, my husband, our son Aiden, my daughter’s Taylor and Hannah, and my niece Kayla who lives with us as well.

Thank you for helping me support the Tourette Association of America by donating to this great cause. They mean so much to me and my family. Unfortunately, due to some personal issues we are having a hard time raising the funds and are asking with a grateful heart for any help you may be able to provide. Thank you and God Bless. 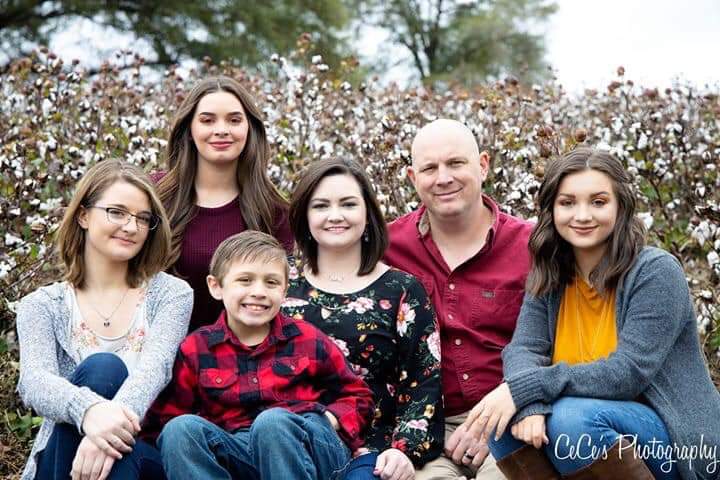