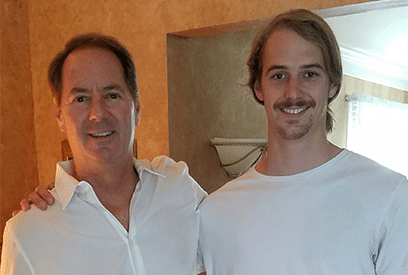 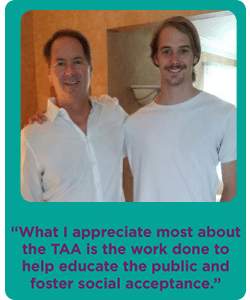 I didn’t know anything about Tourette Syndrome other than the jokes I saw in the movies. My wife and I we were confused and worried about Sean’s future. After many visits with specialists, we began to accept that Sean would need to cope with his tics as there was no cure.

Around this time, we found the Tourette Association of America’s website, which was a great resource and provided facts that we could trust as well as some excellent videos. Through the TAA, we learned that Sean was not alone. I was very surprised at how common tics are, and the information helped give us confidence that he could live a full and rewarding life.
During Sean’s teen years, our family continued to rely on the TAA for information and coping mechanisms; but Sean was way ahead of us. Although there was the occasional jerk who made cruel remarks, most people did not look at Sean differently because he never looked at himself differently. He was active in sports, very social, and always surrounded by friends. At one point in high school, he stood in front of his class and gave a speech on Tourette Syndrome – it was empowering for him and eye-opening for his peers and teachers.

While the TAA helped with understanding and acceptance, it also urged involvement. I am an artist, so in 2011, I held an art show at City Tavern in Philadelphia with a portion of the proceeds benefiting Eastern PA Chapter of the Tourette Association. The show went well and since then, I have held shows regularly to continue to do my part to raise some funds for the TAA and awareness about Tourette Syndrome.

When Sean was a young boy, I worried that because of his Tourette Syndrome he’d have to settle for less. But the truth is, that in some ways, TS has shaped him into the compassionate and confident young man he is today. Currently Sean is doing well in college, studying graphic design. I hope that one day he’ll be able to have shows of his own to benefit a good cause like the TAA. I also hope others will find their own path to get involved with or on behalf of the TAA.