Teen resident, and senior at Kellenberg Memorial High School, Giovanni Kubanick recently received his Eagle Scout status and commendation. He now joins a league of gentlemen and, more recently, ladies who’ve climbed to the zenith of Scout mastery. The ranks include presidents, astronauts, composers, billionaires, movie moguls, and others. Rising to the challenge in itself is astonishing, but Giovanni had to double down on hard work and dedication. Why? Because he not only had to accomplish the extraordinary but do it while tackling the daily trials of living with Tourette Syndrome (TS).

Achieving the rank of Eagle Scout is a very big deal. It takes endurance over time that few can muster. The Scout must work to acquire a minimum of 21 merit badges by perfecting the skill each badge represents. The individual must always show Scout spirit, and demonstrate leadership within the troop. Amazingly, Giovanni accomplished all of that in light of his Tourette’s. Heroes, both real and fictional, personify the moral code and courage of the Eagle Scout. According to Actor Chris Evans, known to many from his role as Captain America, his Marvel character was shaped around such an Eagle Scout. Evans said this about his childhood friend, “Being an Eagle Scout is not easy. He is the best person I know. He’s such a good man and genuinely puts himself last. I told him, ‘Listen, if I get this part, I’m modeling this after you.’”

This year, Giovanni Kubanick was officially presented with the Eagle Scout medal. The Eagle Scout Court of Honor ceremony took place at The Sagamore Yacht Club in Oyster Bay. The last task before a Boy Scout can achieve Eagle Scout status is to plan, develop, and lead a service project — the Eagle Project. Giovanni chose the very subject he faces every day. With the help of a videographer friend, he produced a Public Service Announcement (PSA) for the Tourette Association of America (TAA). “I wanted to help the community and the nation understand that the face of Tourette’s can be anyone. There is no one set of symptoms. They vary from person to person and age to age.”

The PSA is currently streaming on social media and TAA’s site. “I hope to reach as many people as possible,” he says. “Spreading awareness and providing support to others has been ongoing for me.” His mission is being achieved not only through Scouting but also as a confirmed Youth
Ambassador for TAA. The ambassadorship got him a roundtrip ticket to Washington, D.C., where he trained to hone his presentation skills. “I have lectured to nursing students, hospital staff, airport security at JFK, and Homeland Security,” he says.

TS is a neurological disorder characterized by repetitive, involuntary movements and vocalizations called tics. Not unexpectedly, it is easy for teachers and those in authority to make quick judgment calls assuming the tics are just bad behavior. Tics may include eye blinking, facial grimacing, shoulder shrugging, and head or shoulder jerking. Vocalizations might be heard as repetitive throat-clearing, sniffing, or grunting. More complex motor tics and sounds can include facial grimacing in combination with a head twist and a shoulder shrug, or touching objects, hopping, jumping, bending, snorting,
or barking. It is not difficult to imagine that these movements and sounds could be misperceived as disruptive or even dangerous to others out in public. “That is why we need to educate everyone,” says Giovanni.

The early symptoms of TS are typically noticed first in childhood, with the average onset between the ages of 3 and 9 years. Tics come and go over time, varying in type, frequency, location, and severity. Giovanni was diagnosed when he was 6. It started with a coughing tic, which is often thought to be allergies or an OCD issue. “As I grew up, my symptoms became less noticeable, so most of my schoolmates were unaware of my struggles.”

Giovanni has been living the Scout code of “Citizenship in the Community” for some time now. In 2016, he took it upon himself to create the Achievement through Perseverance Award given out to one lucky eighth-grader from his grade school alma mater, Holy Family School. Included are a certificate, a medal, and $300 that he donates from his earnings as a DJ. “I noticed in school that a lot of awards were handed out to kids who seemed to excel easily, but none to the kids working so hard to overcome their own physical and psychological challenges. I wanted to call attention to their perseverance, and reward them for it.” Giovanni has been holding the annual ceremony for the past four years and plans to continue, but hopes to find sponsors in the community who will support and help him grow the scholarship fund.

The mission of Scouting is to contribute to the education of young people to become self-fulfilled as individuals and play a constructive role in their community, and further out, through the importance of “Citizenship in the Nation” and “Citizenship in the World.” It strengthens the feeling of belonging to a united movement. Giovanni will be graduating this year and then off to Italy in the fall to study international relations and politics at the American University of Rome. “I am proud that he lives what he believes,” says his mom, Valerie. He is fortunate to have the care of his family. “We have a lot of relatives in Italy who will support him.”

Honor is the foundation of character and character is what a person is deep down inside, not what someone may think he or she is. Giovanni’s character goes straight to the heart because he is all heart. He is living up to the Eagle Scout Promise, to reflect credit upon his community, his family, Scouting, and himself.

“It is difficult to have Tourette’s in a world where understanding is hard to come by. I am working to change that.” Giovanni plans to continue championing education and recognition of TS and grow his self-funded scholarship to build confidence in kids who are just like him. “I have every intention of making an impact in this world moving forward,” he says. For now, he proudly wears the Eagle Scout colors — Blue for loyalty, White for honor, and Red for courage — embracing the future and the world without fear, and at the ready to share in the good works ahead.

Credit is given to Cove Living, where this piece was originally published. Thanks to publishers Alberto & Linda Cassola, as well as photographer Ann Balderston-Glynn and creative writer Jean Daniels. 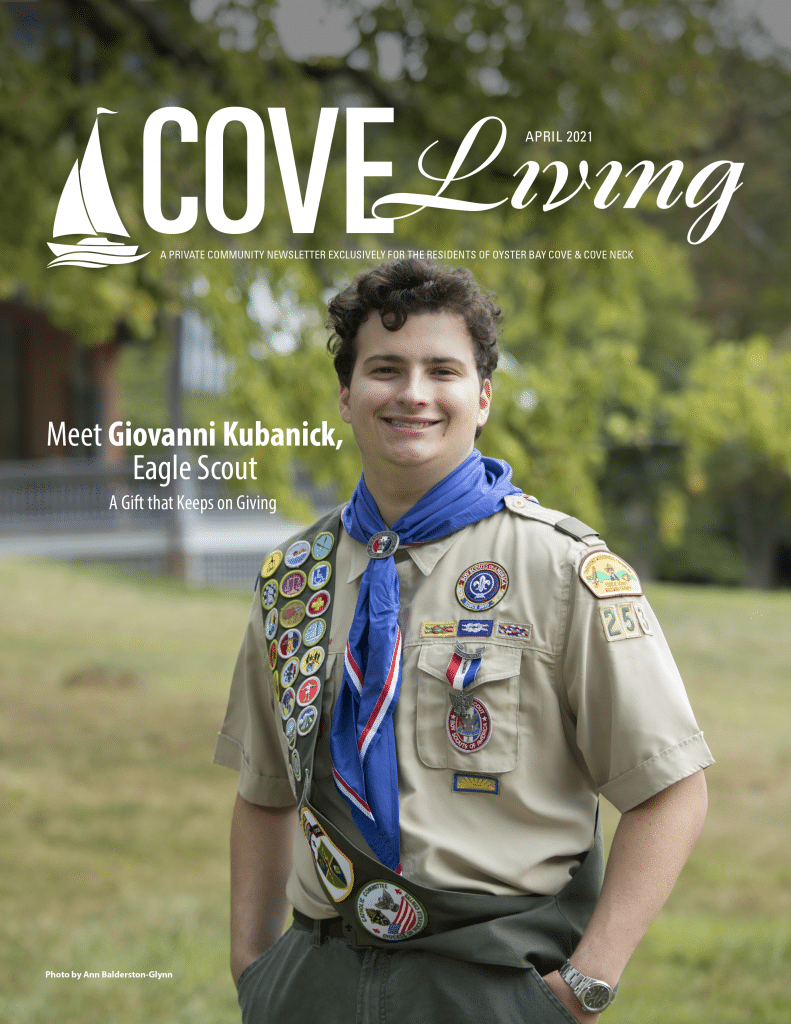 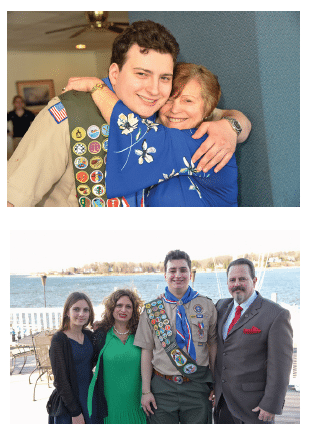