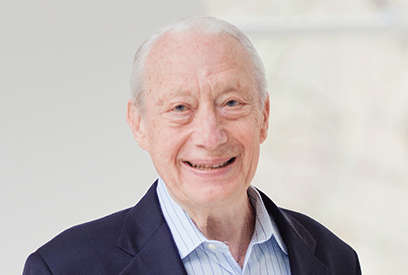 Thomas Gnuse first learned he had tourette syndrome in 1982, when he was 44 years old. Despite experiencing involuntary movements and vocalizations from an early age, it wasn’t until an afternoon watching television that Gnuse realized the cause of his symptoms.

“I was watching a news program on TV, and said, ‘Oh there is a name for all of the things that I do,’” said Gnuse. Now, 34 years later, the Tourette Association of America will be honoring Gnuse and his family at their annual Gala in New York City this November, for their support of research and raising awareness.

Gnuse sat down with the New Canaan Advertiser after the news of his honor broke, to discuss his personal involvement with the TAA.

Gnuse volunteered as a research subject for projects including genetic studies, as well as tests for potential therapies. In addition, the family has supported the TAA to provide information to teachers and encouragement to parents with children affected by various symptoms of Tourette Syndrome.

“My involvement really started when I found out there was such a thing and that there was some research going on that maybe we could help with,” said Gnuse. “There was research going on at Yale and Rochester, and we lived close to Yale, so I thought I could go and volunteer at a number of programs going on at Yale research center,” he said.
Gnuse, the principal of HTG Investment Advisors on Locust Street, said that when he was growing up, teachers knew nothing about tourette syndrome. “I didn’t even have a doctor who told me about it until 1982 when I searched out a doctor from the University of Rochester who was doing research on tourette syndrome,” said Gnuse.
Now, Gnuse said that his involvement with the TAA has revolved primarily around educating people on tourette syndrome.

“What we are concerned with in the TAA is making sure the parents have a way of finding out soon and publishing material to help parents make the environment favorable,” said Gnuse. “That is one of the main areas we are interested in, making sure that there is education out there.”

According to Gnuse, tics associated with Tourette Syndrome manifest in involuntary movements or vocalizations.

Gnuse also said he volunteers for research programs, where he is interviewed or videotaped to see what kinds of situations can affect someone with Tourette Syndrome. Additionally, Gnuse said that research is being done on medicinal treatments to help people with symptoms of Tourette Syndrome. “They test different forms of medicine to help slow down the body movements,” said Gnuse “but that also slows down thinking, and that doesn’t work for me because my living is thinking.”

Despite being affected by Tourette Syndrome, Gnuse keeps a positive attitude and does not let his symptoms stand in the way of his success.“Everybody has got something different, something wrong, and there are a lot worse things than having tourettes,” said Gnuse, who founded HTG Investment Advisors on Locust Avenue in 1993.
Prior to founding HTG, Gnuse earned degrees from Duke, UCLA and Harvard. He then went on to serve for the United States Air Force, work for NCR Corporation, and spent 10 years as a general partner in a venture capital company.

When asked about the effect that tourette syndrome had on his professional career, Gnuse said that he focused on working with his strengths, which include reflecting and thinking in a more steady environment.

“I avoided considering jobs coming out of business school in areas that were highly intense with extremely long hours and travel,” said Gnuse. Gnuse said that people need to learn that tourette syndrome is not disabling, it’s just inconvenient. “Some people think tourettes is something severe, or debilitating in some way,” said Gnuse, “ but it does not affect the lifespan, it is not degenerative,” he said.

“It’s not the worst thing in the world, but one does need to adapt to the things that help ease tourette,” said Gnuse. This includes exercise, lots of sleep, and living a healthy lifestyle. Gnuse also said it is important to surround yourself with people who understand the symptoms and begin to overlook them.

“A lot of it has to do with attitude,” said Gnuse, who said that even though he experiences tics, he has achieved what he set out to do in life. The Gnuse family is now especially interested in the TAA effort to increase awareness among the broader public, and make the TAA’s mission, programs and educational materials more exposed. The Gala hosted by the TAA will be held on November 14th, at Gotham Hall.