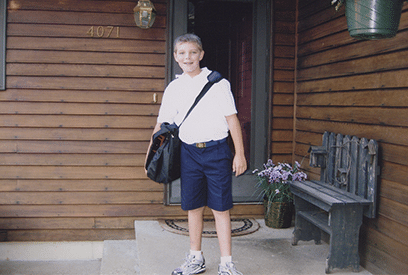 When Tourette Syndrome Doesn’t Feel like a ‘Syndrome’ at All

When Tourette Syndrome Doesn’t Feel like a ‘Syndrome’ at All

Whenever I talk about my son having Tourette Syndrome, I feel weird about the word ‘syndrome’.

By definition, it’s not a derogatory word.

Syndrome – a group of symptoms that consistently occur together or a condition characterized by a set of associated symptoms.

So why the negative feelings when I use that word? I’ve reflected on this topic, off and on, for years. I’ve concluded that it feels ‘off’ to me because once we acclimated to life with Tourette, it didn’t feel like a syndrome or disorder at all.

To take it one step further, it can even feel like a blessing. If (and only if) you’re open to receiving this. If you’re constant to the proverbial ‘beating head against wall’ trying to fix it and making it go away, shushing him/her (which could be inadvertently shaming him), referring to motor tics and noises as ‘weird behavior’ to other people when talking about it, it’s fair to say that you may not be ready to accept TS as a blessing. And no guilt, please, for not being ready. Hear that part? No guilt, please.

This takes time. It’s a shift in thinking. A total shift. It’s like that moment when the hidden dolphin picture finally comes off the page…”I’ve got it!! I can see it! Oh wait, it went away.”

It takes practice to not only receive the blessing, but also to hold on to it and make it last.

One minute you feel it, the next it’s flown away, and you’re left with anxiety and fear again. But if you focus, really focus, on accepting your child’s syndrome as a blessing, you may be shocked at the subsequent fortunes that continue to happen; all because you shifted from syndrome to gift.

So what in the world am I talking about? How can I put such abstractions into actual examples to understand?

I can’t speak for your own experience and potential, and I’m fully aware of the varying degrees of severity with TS, but for me (us), our son’s TS began to manifest itself as a TB (Tourette Blessing) in 5 main ways:

1. When we recognized the correlation between TS and a passion/talent for creative arts: music, writing, acting (recognizing this both in general through the media and also directly in our son’s life) He began writing songs and playing guitar when he was 10 years old. His first song was called “my stupid little hand disorder”, and in retrospect, we realized it was symbolic of what he was going through at the time of accepting his tics and sharing them with others. The lyrics to his song ended with “my stupid little hand disorder…it…feels…nice.”, and we learned that his tics felt normal and good to him…they were PART OF HIM. Over the years, I came to deeply believe that the blessing of TS doesn’t stand alone. It comes with other pieces and parts; gifts, if you will. For Andrew, these gifts were an amazing talent in music and theatre, and not so ironically, this has become his passion in life.

2.When we finally drew the parallels between TS and extreme compassion for other humans. This is real, folks. I’m not saying compassion isn’t inherent in many of us or even in him, regardless of TS, but something happened with his core character as he grew up on the outside looking in. He was always having to take a step back and observe a situation before reacting, and he became quite good at this. Through this process, he learned at a very young age how to see the whole picture; how to look at someone’s behavior and think ‘there is more to this story’, so I’m going to give this person the benefit of the doubt and show them compassion. Not ironic that this fit in with our familial belief in Christianity and the unprecedented Law of Love. Hello!! Blessing

3.When TS became the vehicle for him to learn how to protect his self-esteem and gain confidence. He wanted others to understand. He stood up for himself and not only educated himself, but began teaching his peers around him what it was like to have TS in ways they could relate. These are life skills he will always have

4.When you realize that your child’s TS is pointing a finger at you to become more introspective about your parenting and the reasons behind your concerns. As a parent, it’s too easy to become consumed by all of this; especially when they’re little. The whole process (taking many years), taught me invaluable life lessons on parenting. How to let go. How to give your child more credit. How to bite your tongue. The list goes on forever, but every lesson is even more valuable to me as I have three more children growing up behind Andrew.

5. When it becomes distinguishable that it was none other than his TS (and ADHD and other challenges) that solidified the core of your family; brought you together tighter and closer than you could have imagined because you’re facing the world and fighting for his success, independence, acceptance and happiness together as a family. And oh…by the way, it sure does feel like a blessing that we have each other!

It takes practice, and practice takes time. But when you see the dolphin transcend from the hidden picture, try to hold on to it a little longer each time.

Before you know it, you’ll have it! That peace and acceptance and love and gratitude is all yours.

Courtney Norris is the woman, wife, and mom of four behind what she’ll refer to as a humble little blog called mominthepatch.com.

On a typical day, when she’s not wiping baby butts and drying tears (not excluding her own), she’s reading about ‘eating clean’ while eating some cheese. She also spends countless hours worrying about her son, Andrew, in college; and then…chocolate.

Andrew was diagnosed with Tourette Syndrome and ADHD at the age of 7. As a single mom until he was 10, what did that mean to Courtney? “It meant years of trial and error, patience, unconditional love, bad mornings; really bad mornings. It meant trusting that everything really would be ok. It meant falling down and getting back up. It meant humility and forgiveness and grace. Lots of grace.”

Courtney is ecstatic to contribute her life experiences with the TAA. “I have found comfort, support and encouragement through this organization for the last 12 years. I’m grateful that I’m able to share something of myself to help in their mission.”