This article was written by Meghan Friedmann and appeared in New Haven Register.

The tension would build up, making him uncomfortable and uneasy until the inevitable conclusion – the involuntary uttering of a nonsense phrase, maybe, or the sudden jutting of his arms.

That’s how Justin Farmer, a 26-year-old Hamden councilman, described the symptoms of Tourette syndrome that led to a rocky stretch in his late teens.

But after getting the right diagnosis, transferring to a therapeutic school and seeking inspiration from other people with Tourette, the experience became a core part of his political life.

Farmer said his symptoms began in 2012, as he was starting his senior year at Hamden High School. He said staff insisted nothing was wrong, that he was just acting out, adding that the district asked him to finish his academic career elsewhere.

Family friend Ron Farnsworth, who was Farmer’s scoutmaster at the time, shared a similar account of Farmer’s trials with the school system, suggesting the district was not equipped to accommodate someone with Tourette syndrome.

Superintendent of Schools Jody Goeler, who took charge of Hamden Public Schools in 2014, said the district since has worked hard to address experiences like Farmer’s in ways that meet student needs.

“I think it speaks volumes to his strength and his resilience to (have) overcome whatever barriers were put in his way,” he said of Farmer.

Difficult school experiences are not uncommon for children with Tourette syndrome. Awareness among educators can be “spotty,” according to Dr. Robert King, a professor of child psychiatry with the Yale Child Studies Center who runs the Tourette’s/OCD Clinic.

“The big trouble for kids who have it is that they get socially stigmatized, that people think they’re doing whatever they’re doing on purpose, to be provocative or oppositional,” King said.

Tourette syndrome, characterized by involuntary motor and vocal tics, is considered a neuropsychiatric disorder, which means it has psychiatric manifestations but most likely is caused by neurological conditions, according to King.

As many as 0.7 percent of children are thought to have Tourette at some point, he said, adding that most cases are mild and go away spontaneously.

Among many others, tics associated with Tourette can include blinking, shrugging, head tossing and throat clearing, according to King.

The disorder is rare among adults, he said.

Farmer said that because sound is a major trigger of his tics, wearing noise-canceling headphones helps him manage his symptoms.

Farmer said he felt compelled to tell his story during Tourette Syndrome Awareness Month, which lasts until June 15. He hopes it can help “move the needle” when it comes to public perception of the disorder, he said.

In high school, Farmer’s most common tics involved his arms jutting out and his legs randomly kicking, he said.

Sometimes, he would utter phrases that did not make sense.

It took him about a year-and-a-half to get the right diagnosis, he said. Eventually, an arrangement allowed him to finish high school at Cedarhurst School, which is part of the Yale School of Medicine.

Betsy Donovan, director of Cedarhurst, said the school serves students with mental illness and behavioral and social-emotional difficulties, providing an environment in which they can reach their potential.

Often, teachers’ lack of understanding about Tourette syndrome leads to difficulties for students, she said.

“If we don’t understand something … we can become defensive and make statements out of ignorance and treat people differently,” she said. “I think getting the word out about disabilities like Tourette’s … is important, and who better than Justin?”

Gradually, with help from Cedarhurst, Farmer learned how to manage his symptoms and become more comfortable in himself.

“Mostly through being able to build up my confidence and being able to manage my stress and also the prolific headphones, I’ve been able to go from 30 to 60 tics a minute to two or three,” he said.

During college, Farmer took an interest in politics. Brad Macdowall, now a fellow councilman, encouraged him to run for Legislative Council in 2017.

At first, Farmer was hesitant.

Then he found out about Jumaane Williams, a Black politician who also has Tourette syndrome.

“He is a public advocate for New York City, he was on the city council, he’s an activist, elected official, protests, has been arrested, speaks truth to power. He is from the Caribbean, as well,” Farmer said. “That was like one of the final straws to say, ‘OK, I’m going to run.’”

At 23, Farmer won the race to represent Hamden’s 5th District, and then won reelection in 2019.

Donovan said reading about Farmer in the news makes her smile.

“There’s a young man who had a dream and a goal and he’s fulfilling it, despite all the barriers that he’s encountered,” she said.

For Farmer, having a disability was part of the reason he went into social justice work.

“In many ways, Tourette’s has inspired me to be a public activist,” he said.

Macdowall, who ran Farmer’s 2020 campaign for state Senate, said Farmer’s experience “has equipped him with an extraordinary ability not only to advocate for himself but to know the system inside and out and where it falls short.”

“It’s not holding him back. It’s part of what qualifies him to lead on these issues,” he said.

“It definitely played a major role in what he fights for today,” said Corey Evans, who met Farmer during college and also is involved in the political arena. “He has a very, very strong sense of fighting for people that are underrepresented … people that have to walk into a room and explain … why their lived experience might be different from the other people in that room.”

The disorder has, for example, given Farmer more insight into challenges some students might face when navigating the school system, and into why some police encounters might be fraught.

When he gets stopped by police – which has happened some 30 times, he said – the stress of the encounter can exacerbate his disorder.

And the prospect of having a tic in front of a police officer is frightening.

Farnsworth, Farmer’s high school scoutmaster, recalled that, when Farmer was a teen, police lights and sirens could trigger his tics.

Farnsworth and his wife worried: what would happen if Farmer involuntarily swore in front of a cop, or if he had a physical tic?

“We were terrified…,” he said. His wife made Farmer an identification card he could show police to notify them of his disorder.

“Police don’t like sudden movements,” Farmer said, adding that the aversion is understandable. “But when you’re the person who never knows what you’re up to, you become more uneasy, as well.”

The councilman is now a prominent police accountability advocate.

Farmer said having Tourette syndrom has allowed him “to have more empathy and more compassion,” causing him to think about how “wraparound services” can help all community members succeed.

His work has not gone unnoticed, his reputation now symbolized by an item that once caused him social anxiety: the omnipresent headphones.

They are now iconic.

“I think it has been a powerful and empowering brand for him, and not only for him but for the hundreds of young folks who look up to him and say, ‘wow, I can do that,’” said Macdowall. “‘I can do that.’”

For more information about Tourette syndrome visit tourette.org or njcts.org. 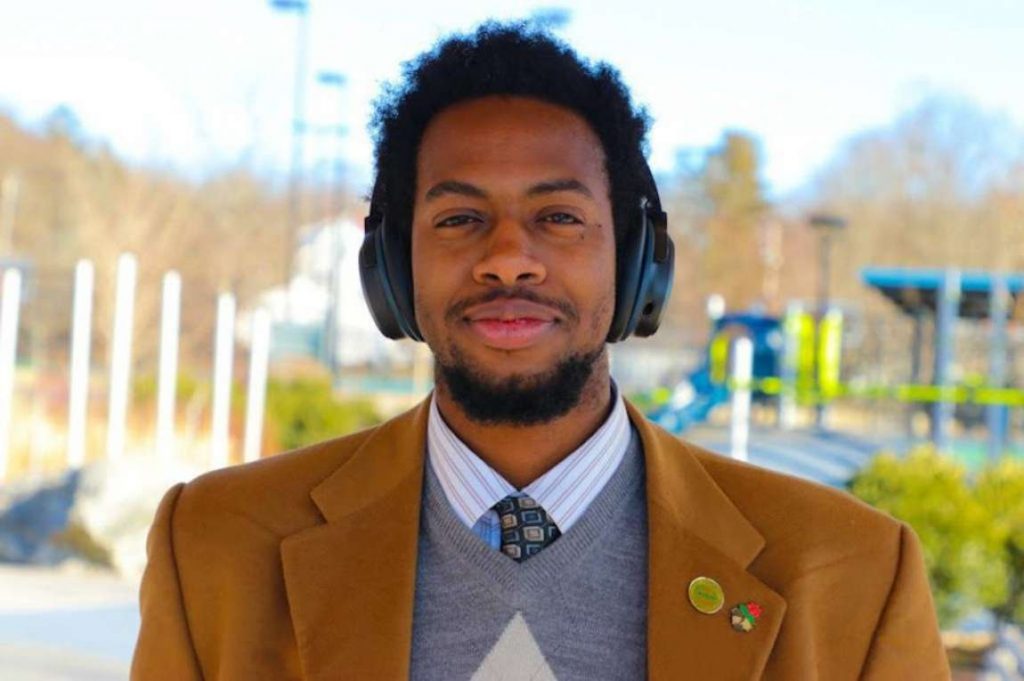